Why Do Goalies Wear Goalie Skaters?

Goalies wear skates designed especially for the position, giving them more protection and an increase in balance as compared to the shorter, thinner blade of a traditional hockey skate. Goalie skates allow goalies to move quickly, laterally throughout the crease in order to better position themselves for a save. Additionally, the profile of a goalie skate blade holder, most commonly known as a Tuuk, allows the goalie to grip the ice at an increased angle. This is known as the “attack angle”. 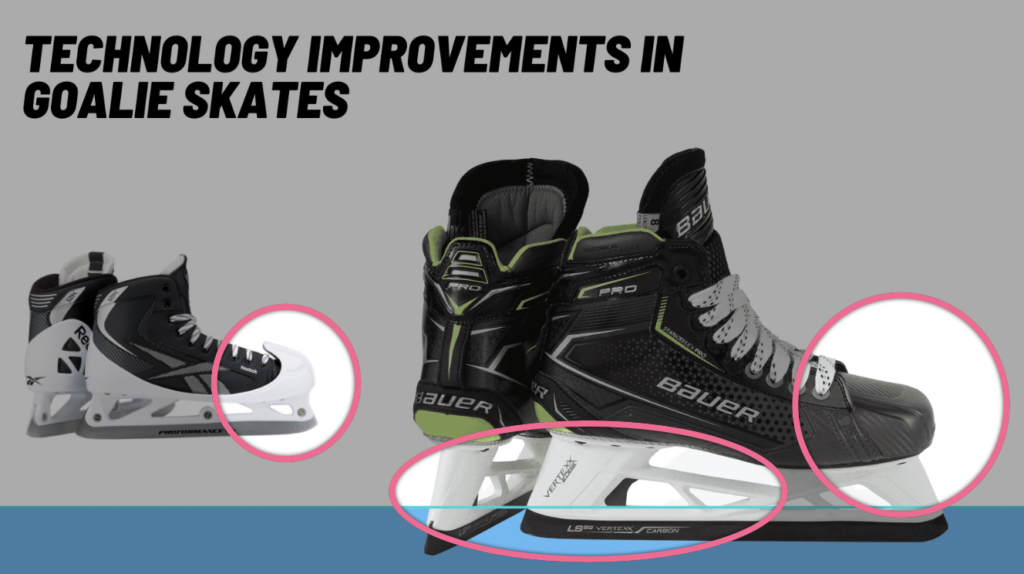 While the same manufacturers that make hockey skates also make goalie skates, there are three things that are notably different in goalie skates. These include the attack angle, skate blade design, and increase in high impact protection to withstand a hockey puck shot at a high velocity.

Goalie skates are specially designed to allow the goalie to crouch low to the ground while holding their skate blade contact with the ice. This is known as the “Attack Angle”. Previously, goalies would often lose their edges due to cowling contact with the ice itself, causing a slip and less of an attack angle. 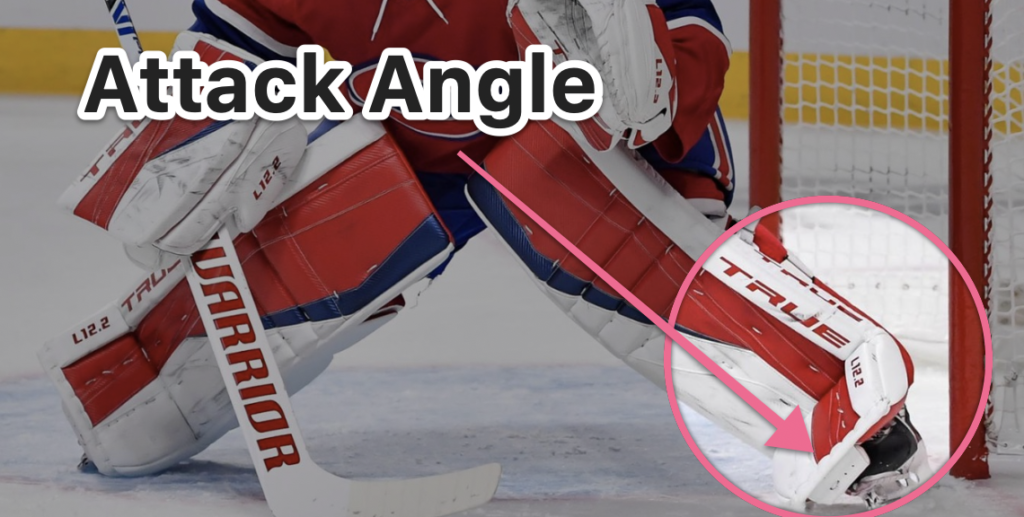 In recent years, transitions to a high-performance one-piece goalie skate style of manufacturing have allowed manufacturers to increase the attack angle by removing the cowling from the skate itself. While there are a few NHL goalies who still wear skates with cowlings, the list shrinks with each season.

How To Improve Attack Angle in Goalie Skates

In order to improve the attack angle of goalie skates, the skate itself must gain more height. If the skate sits taller, the goalie can angle their skate more dramatically. One of the best ways to increase your attack angle is through the use of Step Steel.

What Is Step Steel?

Step Steel is a manufacturer of skate blades that builds a taller skate blade, allowing the goalie to increase the height of the skate itself, which allows them to get more angle while in their stance.

Goalie skates feature a longer, flatter blade than hockey skates themselves. The longer, thicker blade design gives the goalie a better ability to maintain their balance in the crease. 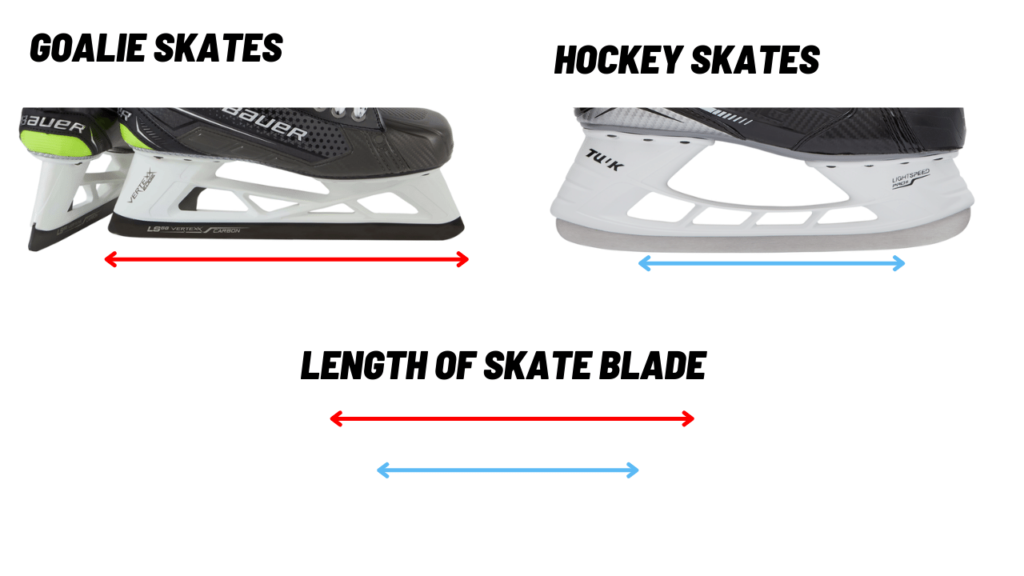 How long does it take to adjust to goalie skates?

Youth goalies typically have the hardest time adjusting to goalie skates for the first time. Due to the thicker blade, a goalie’s skates may feel a bit slower, especially if you’re used to skating with traditional hockey skates. This is because of the increased friction added with a longer, wider blade.

With advances in technology, many goalie skates today actually feature a blade that is very similar in width to that of a hockey skate. This reduces the friction, allowing goalies to skate faster than ever before.

Advancements in technology have allowed manufacturers to build a skate that is safe for use at the games highest level, the NHL, without the use of a cowling. Goalie skates feature high-impact plastic and carbon fiber building materials that resist against high-impact shots throughout a game or practice, allowing for a safer playing experience.

What Is A Cowling?

Why The Cowling Is No Longer Used in Goalie Skates

There are two primary reasons why a cowling is no longer used in goalie skates. The first is because it is no longer necessary due to improvements in skate building technology and materials. The second is that it reduces the overall weight of the goalie skate itself.

Gone are the days of goalie skates being heavier than player skates. While most goalie-specific skates do weigh more than a traditional hockey skate of the same size, the elimination of the cowling has brought the weight of the skate itself down more than 30%.

The photo below shows the major difference in attack angle improvement with one-piece “cowling-less” goalie skates. 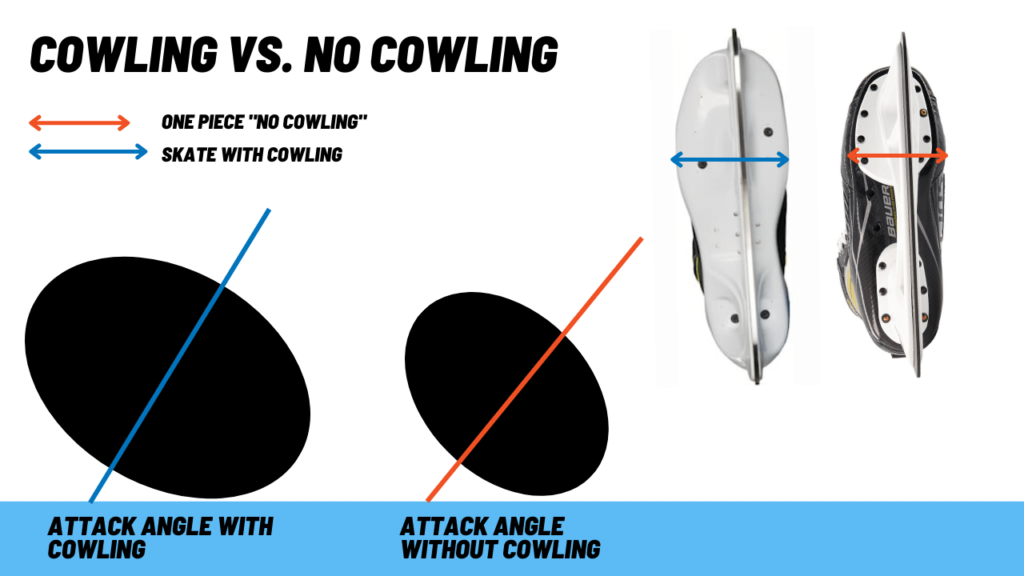 Should Goalie Skates Have A Cowling?

The major difference in a two-piece goalie skate as compared to it’s one-piece counterpart is the weight of the skate itself. A cowling-less skate offers a significant weight reduction, as much as 30+%. Additionally, and less noticed, is the increase in the attack angle offered by a one-piece skate design. A one-piece skate can reduce the width of the goalie’s skate by as much as 1/2″ or more, allowing the goalie to angle their skates closer to the ice than ever before. 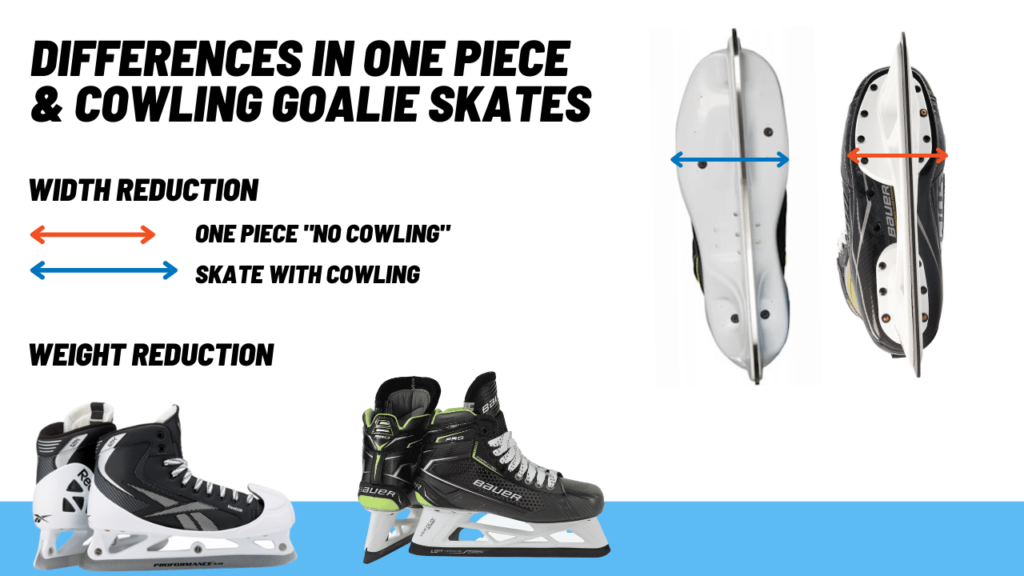 Should I Wear Goalie Skates?

One-piece goalie skates are the preferred skate of nearly 100% of NHL goalies. They’re lighter, faster, and safer than ever before. If you’re considering buying your first set of goalie skates, we highly recommend buying a pair that does not offer a cowling. Conveniently, it’s harder to buy a goalie skate with a cowling than one without.

Once you’ve made the switch to goalie skates, it’s highly unlikely that you’ll find yourself wanting to switch back. Goalie skates are much different than regular hockey skates for a number of reasons, all of which benefit the goalie themself.